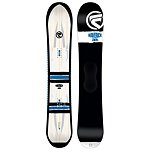 Flow Maverick ABT Snowboard - The Flow Maverick is the Excalibur of all mountain freeride snowboarding. This board was designed to float on the deep stuff, plow through the crud and slice its way through the hardpack.Augmented Base Technology that gives you damping in strategic areas to reduce the chatter, quicken edge to edge transitions. There is a Pow-Cam profile that puts camber underfoot to give you pop and drive and a long rockered nose for effort free float in the powder.There is super light wood in the Re-Flex core to shave weight while still keeping the Maverick strong and durable. Whiskey X plates have been added to give you strength and a smooth ride and there are also Whiskey Shooters carbon strips to give you insane pop while keeping the nose and tail to give you a surfy feel in the pow.The Flow Maverick ABT has its power distributed evenly thanks to the Quadrax glass that gives you a consistent and responsive flex. Rounding off this board is the Graphite Sintered base that is fast and durable. The Flow Maverick is such an amazing snowboard all you need is a buddy riding on board called "Goose" and you have the remake of the movie Top Gun.