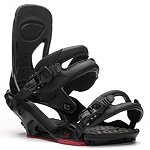 Rome Mob Snowboard Bindings 2016 - If you are worried about the weight of your snowboard binding have no fear with the Rome Mob binding. V-Rod Unibody Baseplate helps drive power while remaining flexible and the SubBase V-Pad reduces chatter and absorbs shock to give you a greater feel throughout. Unmatched comfort with the OpenFlex Ankle Strap and OpenForm Toe Strap while also ensuring that your boots have a secure grip when strapped in. The Cant-in-the-Back allows adjustments so you can get your preferred stance width and the Mob Ultralight Highback helps keep the weight down and provide you with more flex for when you really want to ride freestyle. The Rome Mob Snowboard Bindings flows with the rider for a surfy, pressable feel at home in pow or park.