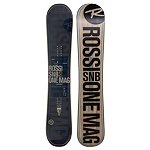 Rossignol One MagTek Snowboard 2016 - The Rossignol One MagTek is a pioneer in the world of all-mountain domination. Re-vamped this year with a new look, but still holds true to its roots of being a responsive all-mountain deck. Featuring the AmpTek All-Mountain profile, you'll have a 40% camber in the middle with 30% on the tip and tail for maneuverability and flotation. This profile will also ensure that you get stability at speed as well as a solid edge grip from the peak to the base. Directional All-Mountain flex in the One MagTek is stiffer under the back foot for control and waist for stability at higher speeds, while softer under the front foot for increased control.Its Radcut Sidecut gives you a solid blend of both quick and lively turns as well as a smoother ride. 5 point Magne-Traction provides better grip between your feet for increase stability and control on harsh conditions like ice. Lite Wood Core runs a TPU strip around the entire sidewall which reduces stress and strain on the body by absorbing unwanted shock. Basalt Fiber with Aramid helps dampen the One MagTek by removing vibrations from the board while softening big landings. If your an advanced all-mountain rider looking for that one-quiver, go anywhere snowboard, than the Rossignol One MagTek is the board for you.